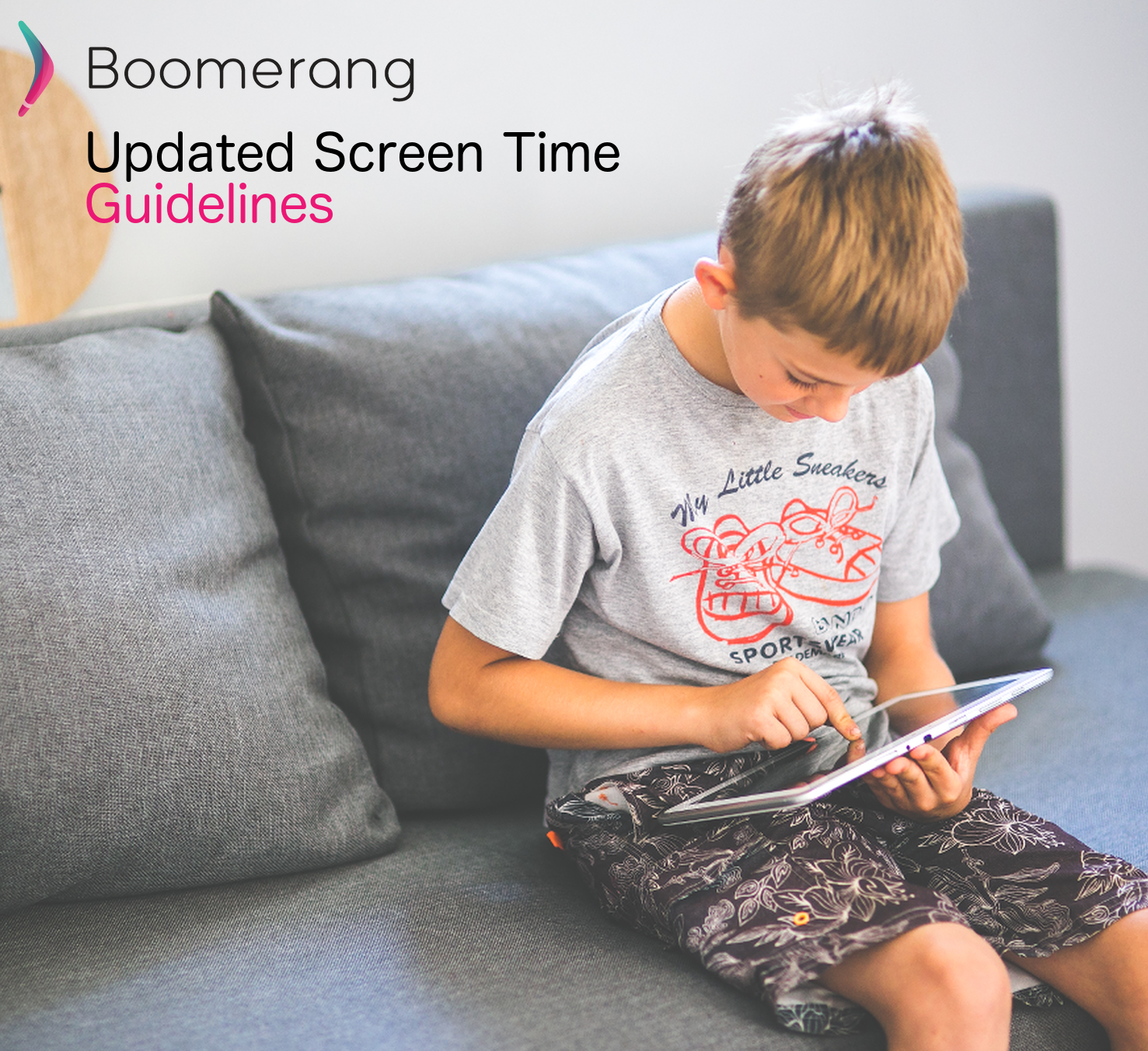 I recently shared an updated guideline from the American Academy of Pediatrics (AAP), which gives parents an idea of how much screen time (across all devices) their children should be allowed. There is continued debate about how much screen time is healthy depending on the content they’re viewing (i.e., education based apps vs. playing games, or watching YouTube.) The AAP recently updated their guidelines to include education-based content for families, instead of just X amount of screen time for X age group. Some of their recommendations are below but feel free to read the whole article here.

Research has shown that kids under two benefit the most from a heavy focus on human interaction. The benefits of screen time are limited, unless that screen time consists of FaceTime or Skype, so giving them your tablet, or sitting them in front of the TV while you’re busy, isn’t great for their developing brains.

For three to five year olds, TV shows like Sesame Street have shown to help children develop efficacy in literacy skills. Apps that are “educationally” based are still robbing your child of the human interaction they require. To quote the article from the AAP, “…thinking skills and executive functions essential for school success, such as task persistence, impulse control, emotion regulation, and creative, flexible thinking, are best taught through unstructured and social (not digital) play, as well as responsive parent–child interactions…” So continue to interact and play with your child at this age, and steer away from using any form of technology as a “virtual babysitter”.

Childhood obesity has been a growing trend for years. Previously, it was blamed on the growth of fast food chains but today, add the lack of activity due to sitting in front of a glowing screen playing video games for hours while eating said fast food, and it’s not surprising that so many children are overweight. Parents (and kids) have replaced going outside and running around with staying seated inside running “virtually” in Minecraft or Call of Duty. This affects adults too! According to the National Health and Nutrition Examination survey, researchers from Stanford University found that from 1994 to 2010, inactivity in men grew from 11.4 percent in 1994 to 43.5 percent in 2010!

The functions (ie: alarm clock) and addictive aspects (ie: constant notifications) built into today’s mobile devices, means that most of us engage with our smartphones from the moment we wake up, until the moment we go to sleep again. Children will mimic this behaviour, bringing their devices to their bedrooms, chatting late into the night or playing games (just one more level!) until the early morning! Worst yet is, many children today have a TV with an XBOX in their room which just amplifies the urge to play at night after mom and dad are sleeping. There is evidence that the blue light emitting from our glowing screens disrupts our sleeping patterns. Screen time is robbing all of us of our sleep, which is needed for growth and development, especially for children.

Since the invention of the TV, screens have been used as a virtual babysitting tool. Screens distract kids from whatever temper tantrum they’re having, or whatever mess they’re making, or whatever destruction they’re intent on causing. It helps temperamental children (who may otherwise have difficulty being calm) to focus on one time, and the amazing this is, it usually works!

Parents are busier than they’ve ever been. With the rising cost of living, both parents often have to work, and with any sports or programs the kids are enrolled in, running around becomes inevitable. It’s no wonder that after 12 hours of doing things for our kids, that we want to sit on the couch and watch TV instead of actually interacting with them. There’s less time in the day to relax and decompress, but sitting in front of screens isn’t always the answer. As mentioned above, kids need human interaction in a big way, in order to support their development. Kids are also copycats, so instead of sitting and playing on your phone or watching TV, read a book, read your child a book, or better yet, have them read you a book.

As technology continues to become ubiquitous in our everyday lives, parents must learn new skills to battle the constant love/hate with technology. We are the first generation of parents having to learn on the fly how to handle this technology addiction. We also still know very little about the true, long term effects of this proliferation of technology – some research says technology is good, while other research says it’s not! The AAP recommends that parents focus on three areas to help their families grow with healthy technology habits.

Following these recommendations will help your family grow up with technology, not because of it, and will help to keep everyone (including parents!) functional, healthy, and happy.

How Electronics Affect Sleep And What You Can Do About It

Screen time guidelines for kids give parents the controls

Obesity In America Comes From Inactivity, Not Too Many Calories: How Technology Has Led To Widening Waistlines

Media and Young Minds | From the American Academy of Pediatrics

What Is The Circadian Rhythm And How Does It Influence Human Behaviour?

Sleeping Well in the Digital Age