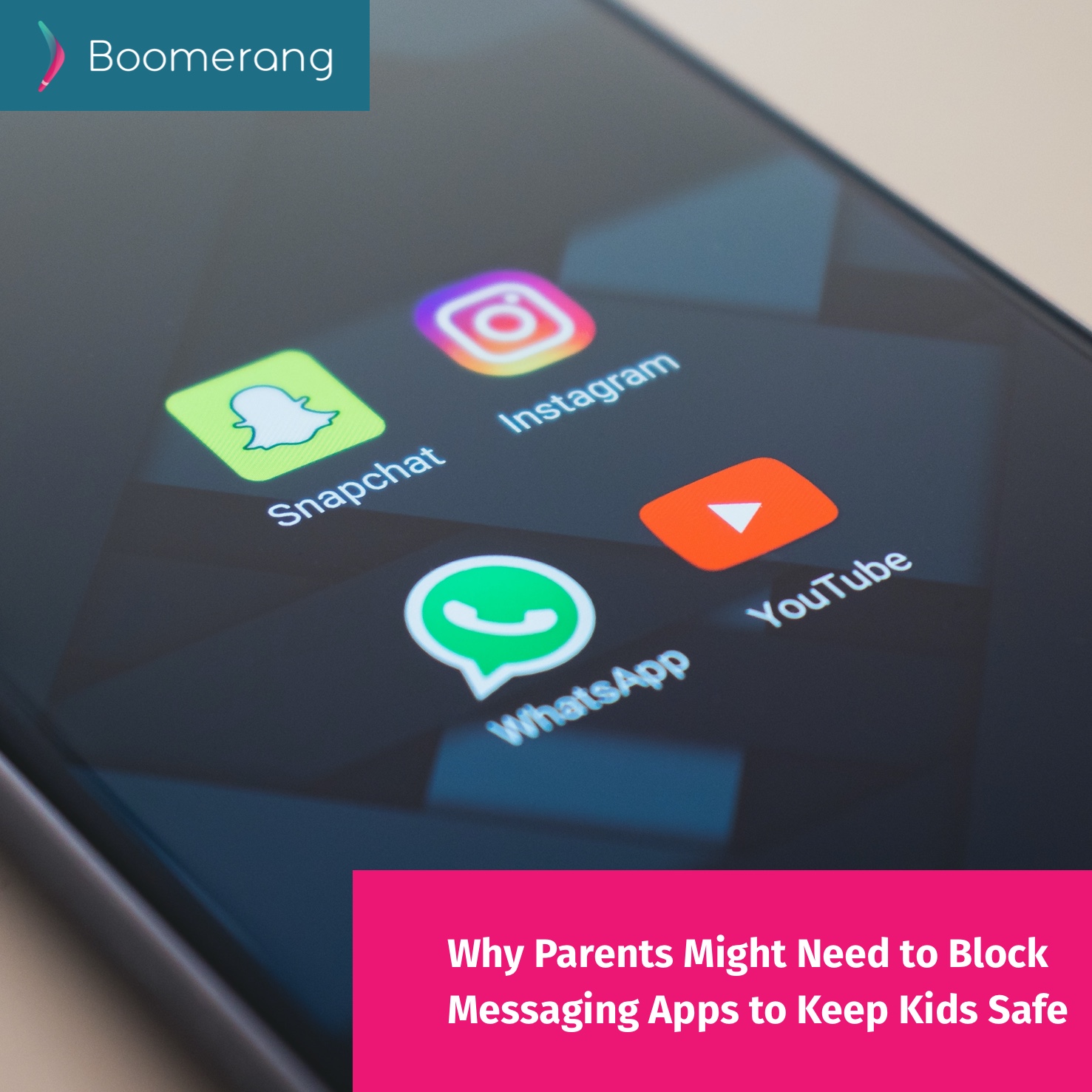 It’s a troubling fact but many parents don’t even know what apps their children are using on their phones. Even more troubling is that messaging apps in particular present real dangers to kids safety online – and many parents are oblivious!

I’m going to look at why today more than ever, knowing and being able to control the use of apps on your kids phones is so important. I’ll focus on messaging apps but the same principles apply to any apps.

How Texting Has Changed

In terms of parental control this was easy to manage using an app like Boomerang – it allows you to easily monitor text messages sent and received. But things have changed …

Today there are more messages sent daily using messaging apps than using the phone texting feature. Apps like WhatsApp, Snapchat, Viber and many more have become the preferred method of sending messages.

Initially the reason was because these apps meant essentially free texting – using the phone data package or Wi-Fi, saving any text message costs. But what started as simple “free” texting has developed into full communication platforms.

Now with an app such as WhatsApp you can send texts, images, videos and files. You can have voice calls and video calls for free (using Wi-Fi) and they have group chat features.

So What’s The Problem?

Well, most parental control apps cannot monitor these chats or messages taking place on third party apps – it is difficult to find out what your kids are doing on the messenger apps. Obviously this presents a potential threat to their online safety.

As a parent you have a duty of care, you need to know what apps your kids are using and how they are using them. You can’t ignore the fact that most of their messaging is happening on third party messenger apps.

Simply monitoring their text messages is no longer an option. Some messaging apps present unique challenges. With Snapchat for example most messages are time restricted and actually disappear from the site – they self destruct! This feature has been rolled out to other messenger apps.

This means that even going through your kids phone manually will not show you the messages they have sent and received. Most of their activity will go unnoticed. Don’t underestimate the popularity of these apps.

The use of these messaging apps has exploded especially with younger users. Snapchat for example has over 300 million users worldwide and in the US over 45 million users – 90% of American users are aged between 13 and 24. Source: AcisNI.com.

How Boomerang Parental Control Can Help

Thankfully there are some things you can do to control how your kids use certain apps. The first step is to find out what apps they are using right now.

Boomerang makes this easy – you can view the installed apps list report to see at a glance every app they have installed on their phone.

From the list of apps you can chose what to do with each app and block any app you think is inappropriate. You don’t want them using Snapchat – simply block it.

Control the Installation of Apps

You can use Boomerang to control the installation of new apps. Once set up, when a child tries to install any new app they will be restricted from using it until you manually approve it. This feature gives great control and peace of mind.

When you get a notification of a new app it gives you the ability to do some research and decide if it is appropriate or not. It also opens the door to a valuable discussion with your child about the safety risks posed by certain apps. Good communication is the key to any ongoing education of your children regarding internet safety.

To Block or Not to Block?

Simply blocking certain apps may be your best approach especially with younger kids. Most of these apps require users to be over thirteen but of course this is easy to overcome. Does your ten year old really need to be using WhatsApp?

For older kids simply blocking them may not be workable. You know you’ll get the argument “all my friends are using it”. You will feel under pressure to allow them to use these apps – they are so widely used.

In truth many of these apps are great ways to communicate. They are essentially free and can be fun to use. As always the intention is to educate them and help them to stay safe.

Parental control apps are great tools to help with internet safety but they are only part of the equation. Teaching your kids about the dangers they can face online is important – as is how they should behave online.

Have you considered a Device Contract for your kids? It can be a great way to get the conversation started and set ground rules right from the start.